Evolution of a logo

This article takes the reader through a fictional creative process of making a new company logo from first sketch to 3D model. You will see how you can use different free/open-source applications to create something from beginning to end.

This article is not meant to show you how to create the logo step-by-step. It has been created to, hopefully, give inspiration to people who might want to look at different software but didn't know where to start or what they could do with them.

All of the applications used here are totally free to download and use without restriction.

THIS IS NOT A CLICK-BY-CLICK TUTORIAL. All of the steps are shown but a lot of detail has been omitted. If you are following along you will need to learn how to perform each step as you come to it.

You are given the task of creating a logo for a new business that hires yachts to holiday-makers. The client has given you a design brief which is for a simple logo that shows something you would see on one of their yachts. You decide to use the image of a porthole and a view of the sea beyond.

First you need an initial sketch - something to give the client an idea of what you'll be creating. 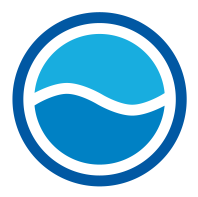 Make a note of the blue colour values you used. This will make things easier for you later. (Make sure you get the RGB colour settings, not CMYK.)

You now have the initial sketch - figure 1 - to show to the client. 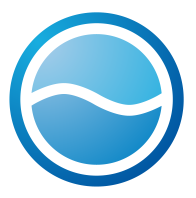 The client likes the idea but: "Can it be made a bit more 'dynamic' to show light shining onto it?"

The client says: "It's nice but we were expecting something a bit more '3D'".

Knowing, as you do, that the Scribus graphics tools are good, but they can't cope with very complicated effects very easily, you decide to take this to the next level. You move over to Inkscape, which can be downloaded from here. But you also know that Scribus can save pages as SVG files which Inkscape can handle so you don't need to start drawing the logo all over again.

These all look good but you decide to go with the "Button" version. You also want to make it look a bit more "3D".

The client likes it but they were wanting "something really 3D, you know?".

Whilst you know that Inkscape can produce some fantastic looking 3D effects you realise that any further changes the client might want will take a long time to alter in your Inkscape drawing. Just changing an angle slightly will cause a lot of hassle unless you've set everything up just right. So you step up again and bring in the heavy guns. You move over to Blender (which can be downloaded from here).

Since you know that Blender can also import SVG files you know you won't have to re-draw the logo again. However, before you get into Blender, you need to clean-up the SVG to make later editing easier.

You need to simplify the curves because Scribus has a habit of making curves out of lots of little bezier curves when you use the Path Operation functions. It's not usually a huge problem but it's much easier editing a small number of curves rather than a whole load of them. 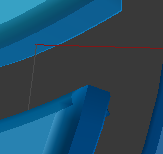 This is starting to look okay - figure 8 - but there's a problem with the "corners" of the shapes - figure 9. Because Scribus, Inkscape and Blender don't work with curves in exactly the same way there can be discrepancies when you move drawings between them. You'll need to fix these now. Your client won't like shapes with weird corners. Remember to save your model before you start changing things so you can go back if you make a mess. (This is just a quick fix that works for this model. You should fix your own models properly.)

That looks better, now to set-up the scene. 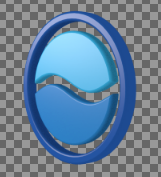 You show the new logo - figure 10 - to the client and they say: "It looks great, but can we see it 'in action'? And how about giving it a shadow too?"

Now that you've got the base image it's time to do some more processing. This time you'll be using GIMP, which can be downloaded from here. 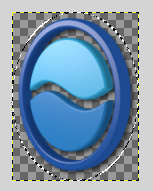 You could have added the shadow in Blender but you'd have had to create a background plane for the shadow to fall on and therefore wouldn't be able to use a transparency behind the logo.

Putting it Into Action 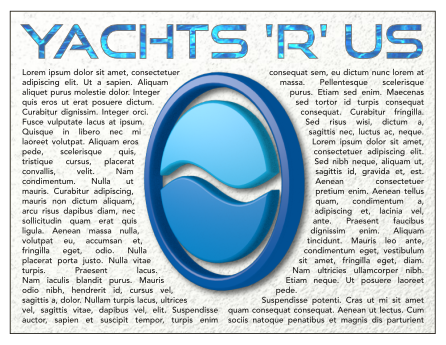 And you're done. The client is very pleased and gives you a bag full of cash. Hooray!

If you've been reading all the way to here you've seen how an initial sketch made in Scribus can be taken through various applications all the way to a completed 3D model and back into Scribus again. Isn't free software fantastic?

Hopefully this has given you a little bit of inspiration to learn more about Scribus, Inkscape, GIMP and Blender and start creating some graphical masterpieces of your very own.