The discussion about the future development of Master Pages

Editing objects on master pages for one or more particular regular pages.

This table is still empty and will be until a working agreement is reached about the scenarios and proposals to solve them.

The whole discussion on the mailing list has taught me, that handling dynamic content in a master page is a difficult matter which hasn't been done right in any DTP software.

This proposal tries to figure out, how this goal can be achieved using -- mostly -- features which are already implemented in scribus (following the rule to Keep It Simple... Sir).

Features and limits of the Master Pages

The master pages are basically ok as they are and will contain elements which are identical on every page based on them.

There could be some enhancements:

Role of the scrapbook and enhancements needed

In order to be able to use the scrapbook as a replacement for more dynamic master pages, a new lock status has to be added: "Lock position". If its position is locked, the object will be inserted from the library will have exactly the same position as it had at the moment when it has been added to the scrapbook.

I propose to leave only one lock button in the Properties Palette: 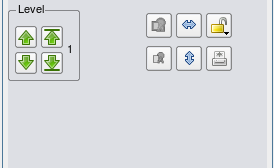 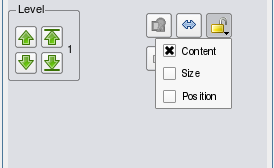 Notice: Personally, I'd prefere not to have that small triangle. It's acceptable here since it does what a basic use wants when clicking on the button: lock and unlock (only the extra functionality is hidden).

There could be some further enhancements:

The element in scrapbook which relate to a master page, may only be shown when the current page is build on the related master page.

A tag system could be built on the the base of the attributes editor. And every frame could get be assigned a set ot tags.

This could be implemented as a plugin.

A separate plugin implements a way to select and batch process frames based on their tags and some other characteristics. This plugin will work in a similar way as the filter editors in the mail programs: 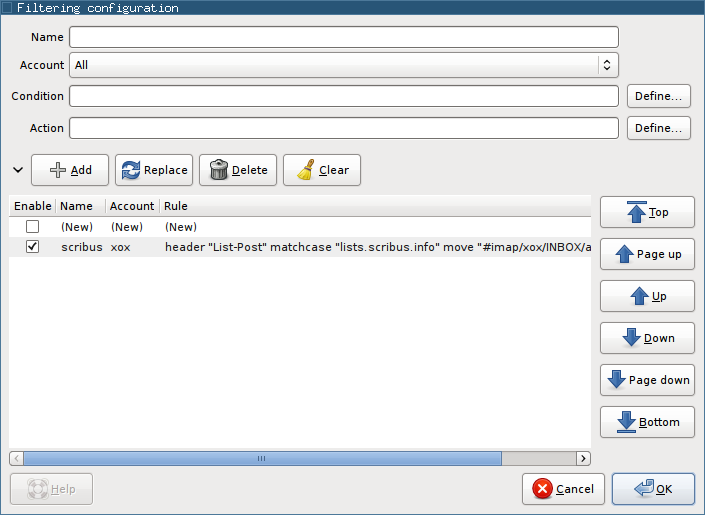 Another KISS way (the "prototype" approach)

Master pages contain two kind of items: background items (that's the kind we have now) and prototype items. When applying a masterpage to a regular page, copies of the prototype items are placed on the regular page with size and position initially locked. Those copies can be edited in a normal way.

In effect the objects based on prototypes are automatically detached. One could provide an option to manually synch them with their prototypes, either on a per-object basis or when the masterpage is re-applied.