Difference between revisions of "Tables"

The following is for Tables FX, not for bread and butter tables.

It's not clear to me where this fits in with UI/usability, but I was thinking that, as plans begin to form about what to do with Tables, that perhaps we should step back and reconsider tables.

The standard way of conceptualizing a table is as we see in many word processors: a grid-like structure with so many rows, so many columns, very much like a spreadsheet, and thus the many ways that tables are typically set up to behave as spreadsheets. There is nothing wrong with this, yet nothing that restricts a table to this kind of behavior.

With Scribus, however, a table is already more of a free-form structure, with the ability to resize and move individual cells. What if we reformulated the idea of what a table is, then consider the traditional table structure a special case?

What we are looking for that is rather lacking now are the following:

What if we think of each of these as also being a table?

What I am getting at is that these could also allow for loading data into them, and navigation from one to the next, if they just somehow were considered a table by Scribus. 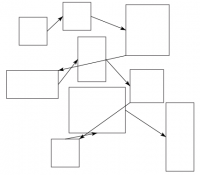 What each requires is a sense that they are a group, with some sort of sequencing, that may have rows and columns, but maybe not. There also must be allowance for the fact that one in the "table" might contain text, another an image.

Tables as an external feature

The big question for me is: are tables a DTP feature? Or is it something DTP should borrow from the Office Suites?

I don't see how the table handling fits into the whole Scribus workflow, so i would suggest that Scribus creates a new frame, whose structure will be externally managed.

I'd love to propose a solution similar to the OLE embedding of MS Excel tables and graphics into MS Word documents, but—since Scribus sets a very high standard on how the text is layout—I can't think of any Office Suite which would deliver an output which is ready for print.

My second best suggestion is a Scribus Plugin, which would only handle the table structure:

The work on the new XML format is an excellent time to lay the groundwork for a professional Tables feature that can support large projects, in the way that the FrameMaker Tables feature does.

A Tables feature for a real DTP is a schema element in its own right, with a coherent set of attributes and sub-elements. It's more than a collection of frames with borders that just happen to be next to each other.

It has some definite number of columns, and is not susceptible to being corrupted by deleting one cell out of a column -- if a column exists at all, it has a cell in every row.

Similarly, a row has a cell in every column if it exists at all. (A cell can be empty, or merged with neighboring cells, but it is incapable of being deleted or resized by itself.)

A table has header row elements and footer row elements, which are instantiated automatically when a table paginates. Layout properties of the table, such as cell margins, are inherited by every cell in the table unless locally overridden.