This is the discussion page for the Google Summer of Code project I've applied for on supporting dynamic layout styles. Please add any comments, ideas, suggestions, or additional use cases that you might think of for discussion. Thanks! --Michael Koren

I'm currently a PhD student doing my dissertation research on a range of computer science topics, centered around abstract data representation, processing, and interfaces. I started using Scribus to replace WordPerfect shortly after I switched to linux a few years ago, and immediately became intrigued by its potential for exploring some of my ideas in the areas of both visual (layout) and content organization.

My main feature wish in using Scribus has been to somehow integrate its precise, WYSIWYG layout capabilities with the flexibility to rapidly modify, replace, or replicate an entire layout according to saved rules or contraints--in other words, to have dynamic layout styles for structured content. I have been wanting to do a project to implement this capability for a year now, and have been browsing the Scribus code and planning my implementation based on my needs in documents I've created, but so far I haven't had the designated time to devote to it, so I would love the opportunity to participate in it through Google Summer of Code.

Creating complex, one-time document layouts in Scribus is easy thanks to its precise, yet easy to use frame-based interface. But often it would be desirable to create a carefully-constructed layout style that can be reused for many documents with the same general structure, that can adapt to small variations in content. This would also mean that the same content can be dynamically reformatted by applying a different layout style.

Due to the many different usage possibilities offered by this concept and the many specific features that could be useful, I plan to implement a general framework to support structured layout that can be adapted and extended to many different purposes. I will then implement a few specific applications of it in Scribus. The core of the framework will be a self-contained c++ class library for manipulating abstract structured objects and the relationships between them, designed to be usable by multiple applications in the future.

The system will be based on sequences of objects (in this case, text or image frames in a layout). Each object in a sequence can have its attributes defined relative to the previous object or the parent object (the sequence itself). Thus, frames can be kept equally spaced as their size changes, or distributed equally across the page. Other attributes, such as color, size, and even content, can be set to be the same for an entire sequence also, so that linked object "clones" will also be a possibility.

Finally, sequences can be nested or even overlap, and sequence styles can be defined and applied to any sequence with a compatible structure. Sequence styles can both define the layout (relative positions) of objects and apply specific formatting styles to each object in the sequence, so the entire look of a document can be changed by changing its style.

Initially, I will provide support in Scribus for sequences of frames in a document, by adapting the existing layout code to call my library to find the objects' positions and attributes. Eventually, it could be integrated into the text layout engine as well to provide more fine control over text layouts, even allowing for specific needs such as rendering equations from latex or user-defined sources.

Dynamic layout of objects/frames (to be done in this project)

Potential integration with text layout engine (long-term, not for this project)

Update: This may be possible (to a very limited extent, with user-created translation filters) even by the end of this project, without modifying the text layouter, by dynamically creating multiple frames in a sequence. See the content-determined layout section below. --Michael

I would not plan to support free, individual spacers (not part of a sequence) or text-layout integration yet in this project, but the framework would support them.

One of the main strengths of the proposed system is the wide range of applications which it would support. Below are listed some more detailed examples and explanations of some of the use cases that would be possible through this approach, ordered from least to most technically complex to implement.

Example chart from the implementation section below: 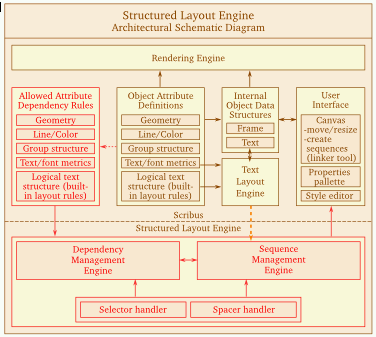 View showing sample sequence and spacer relationships for such a chart: 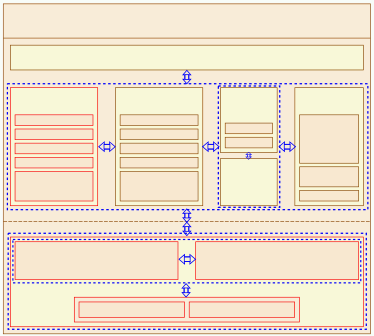 (Not all relationships are shown.)

A spacer can be used to duplicate any or all attributes, including content, of one frame or sequence in another, allowing clones to be made, which can further be aligned in arrays using sequences if desired

The simplest kind of layout style would create a layout based on the structure of its contents, e.g. an equally spaced array of frames, or a chart style which expects heading and cell frames in a particular structure within the sequence. But it should also be possible for a semantic style, like "section" or "chart," applied to a part of the sequence content to be interpreted by the layout style to support semantically labelled input formats.

I listed this as a long-term use case above, but it should actually be possible even without modifying the text engine using this approach. Procedure:

(*) Eventually, it would be nice to support structured text directly in the text engine, but that is outside of the scope of this project (even besides changing the engine itself and the internal representation of text, there would be other issues, such as displaying structured content in the story editor, that I can't go into this summer).

How it will be implemented

Two methods, the first easier to implement but less powerful. (This section is a little outdated; I plan to support both.)

Note: I can look into specific support for DocBook or other popular formats (enter your favorites in the section below). Most likely only a subset will be directly supportable without Level 3 support from my engine (not this summer :), but the rest may be usable via XSL prefiltering

There are more possibilties to explore, but not for now. ;-)

Please list any existing content or stylesheet languages for which you would be interested in seeing import/export support. I won't necessarily get to writing filters for (any/all?) of them this summer, but I will look at the features they support to try and make sure my implementation is compatible if possible. I've listed a few mentioned on the mailing list to start with.

All code would be C++. Outline of class library functionality:

Here is a high-level conceptual block diagram of the proposed system.

(*) Long content, like most stories, must flow across pages and, hence, will have a variable number of frames. In other words, a section consisting logically of a heading and a body would generate a heading frame and a body frame handled by a layout style, but actually the style would have to create n linked body frames across pages as appropriate.

In order to be most generic for use with many projects and for ease of updating, I plan to keep the dependency-tracking logic that handles the relationships between objects and attributes independent of the actual attributes supported by Scribus, such as frame position and size, color, content, etc. That means that a table of available attributes and their possible relationships must be maintained and provided by the application, as shown by the left red box in the diagram.

- what is the best data structure to use for attribute rules to support all this?
- these attribute rules are closely related to spacers, which define user-specified relationships between objects/attributes; maybe attribute rules then just define data types and built-in "spacer" relationships (and external plugins could define fancy spacer types)...
- it would be nice if the spacer/attribute rule implementation could be decoupled as much as possible from the dependency engine, so the latter wouldn't even need to know details of their structure