How to create an RSS Feed Symbol

This tutorial will show how you can create an RSS Feed symbol using only the tools in Scribus.

You probably wouldn't use Scribus to do this as there are many much better images available free to use but this tutorial is mainly about using the Scribus tools.

Some of the techniques used here are a bit tricky but there's nothing too difficult, it can just be quite a lot of work for something that looks simple.

Color Editor - menu Edit → Colors… - to add these to your document.

If you don't know how to do this see the Scribus Help Manual via the Help menu, section "Documentation / Editing Colors". If you don't have this manual installed, look at the "Colours" section on this other tutorial. If you're still struggling, try asking about it on the Scribus Forum. 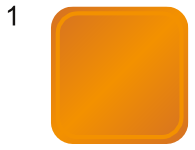 Now you'll need to create the background rounded square shape as in figure 1.

This bit is fairly easy.

You should now have a similar shape to that in figure 1. 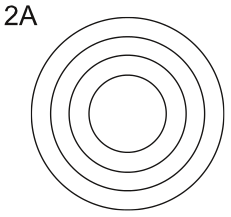 This is a bit harder than it might seem at first.

Using these percentage amounts should give you something that looks like figure 2A. 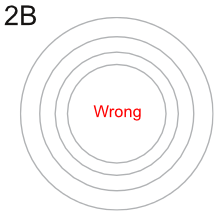 You can't just use a single scaling size and create 3 copies in one use of the Transform tool. Doing so would get you something like figure 2B and it doesn't look right. Unfortunately you've got to do it one step at a time. (Alternatively you could create the circles manually and set them to smaller sizes but it's just as much hassle.) 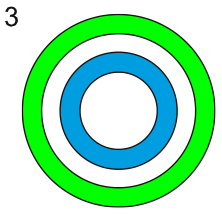 Now you need to make the four circles into two doughnut shapes.

You should now have two doughnuts instead of four circles. Figure 3 is coloured so you can see the result better but if you do that yourself remember to undo before continuing.

This is the tricky bit.

Align & Distribute palette to align centrally. (You can't use the normal Line tool as normal lines can't cut polygons, but more on that soon.)

The bezier line has now vanished - although leaving the other one - and the doughnut has been split in two. You might be able to see where it's been split by the slightly thicker looking lines at certain places. 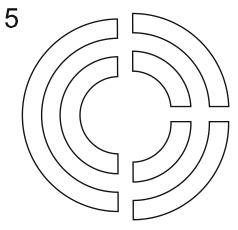 Your doughnuts have now been split into two "half pipes". In figure 4 they've been moved slightly so you can see but you shouldn't do this.

Now you need to split them again.

You can try doing the "cut" quicker by drawing an "L" shape to do the cutting instead of two straight lines but you might find that it's more difficult to get the centre alignments right. You can try though.

You should now have one half pipe on the left and two "quarter pipes" on the right. In figure 5 they've been moved slightly so you can see.

Putting it all together 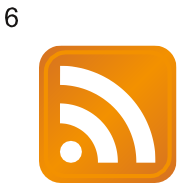 You can now delete the left-hand half pipes and the bottom set of quarter pipes as they're not needed.

You'll can use the

Align & Distribute palette for a quick placement or you might want to place them manually as is your preference.

You should now have figure 6, and you're done. Phew.

It's quite a lot of work for something that's pretty simple but hopefully you've get more of an idea about how some of Scribus' functions work, and that's the main thing.