This is a frequent request or question on the mailing list: "How do I make a shadow behind an image?". The idea, of course, is to create a pseudo-3D effect, as if the image is floating over the page. Shadows may be a bit overrated, after all, your layout should about the content not the special effects. Nonetheless, let's assume you'll be using this judiciously, and you really want to do it.

Compared to various other software programs, such as Gimp, for example, Scribus does not have a built-in way to create such effects.

The simplest way to this is to duplicate your image frame (Hint: Use Multiple Duplicate, where you can specify the offset), then convert to a Polygon, changing the background color, maybe the Opacity, and you get something like this: 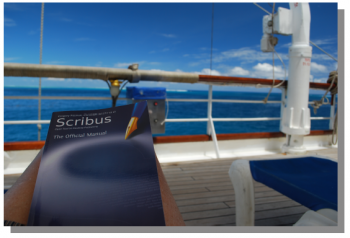 Admittedly, this is not what most are looking for, with these hard edges.

Let's try some manipulation of that rectangle, all still within Scribus. We'll add a vertical gradient and then manipulate the opacity to get something a bit softer: 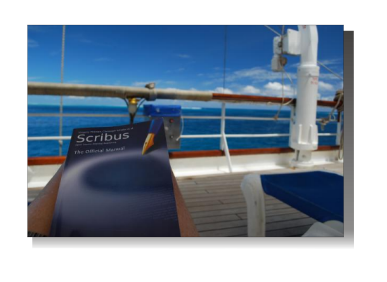 Certainly better. I would add here that I attempted something a bit more complex – instead of using a rectangle shape, using two triangles, as if the rectangle was divided up into two halves diagonally. This way, you could have one triangle use a vertical gradient, the other use a horizontal gradient, so both exposed edges have a softer look.

Unfortunately, this creates a diagonal line which could not be eliminated with various attempts at adjusting positions and settings. If you don't mind that, you might consider trying it out. The more I looked at it, the more bothersome it was to me.

This may be more what you had in mind in the first place, and you may find it worth the additional work: 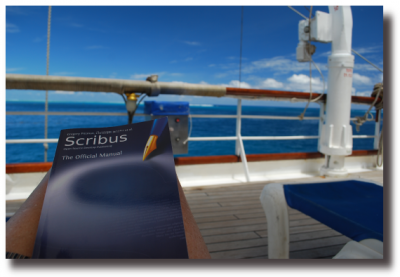 This was accomplished by making the rectangular shape in Inkscape, then applying a Simple Blur to the edge (Filters > ABCs > Simple blur). It would be convenient if you could save as an SVG and import into Scribus as a vector, but unfortunately Scribus cannot manage the blur feature.

Instead, export as a bitmap from Inkscape, making a reasonably large file (perhaps 300ppi). Now you can import into an image frame and adjust dimensions, adjust the transparency as needed. When you use transparency, a relatively dark color of your rectangle will allow for more flexibilty in the results.

As with many tasks in Scribus, you will always want to be reusing these frames by copying. In addition, you might make a group of the image frame and its shadow, then copy and use that group, later ungrouping so that you can load a new image, which will save a lot of time and keep the relationship consistent.

So finally, we come to this example: 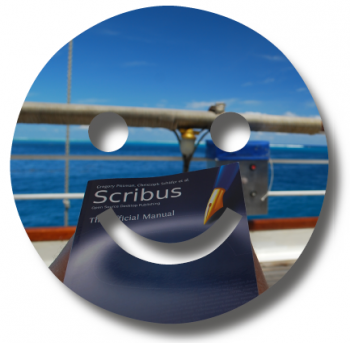 Maybe a bit more involved than you might expect. What we did here was start with one of the predefined shapes in Scribus, do a screengrab, save as PNG, import to Inkscape, then apply the blur (several times, actually), then save again as a PNG, then go about our process in Scribus, this time using a smiley converted to an image frame in front. Phew!

Courtesy of Owen, here is another way to create shadows, using the ImageMagick command montage: 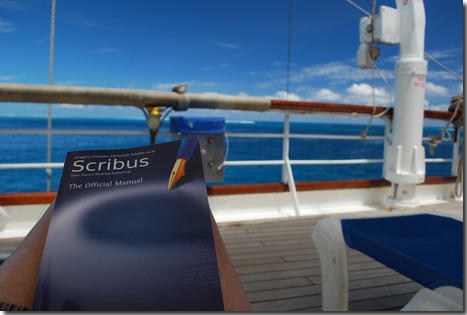 There are said to be some parameters which can be used with -shadow but they are a bit cryptic. Note that the shadow has become an add-on feature of the image file.